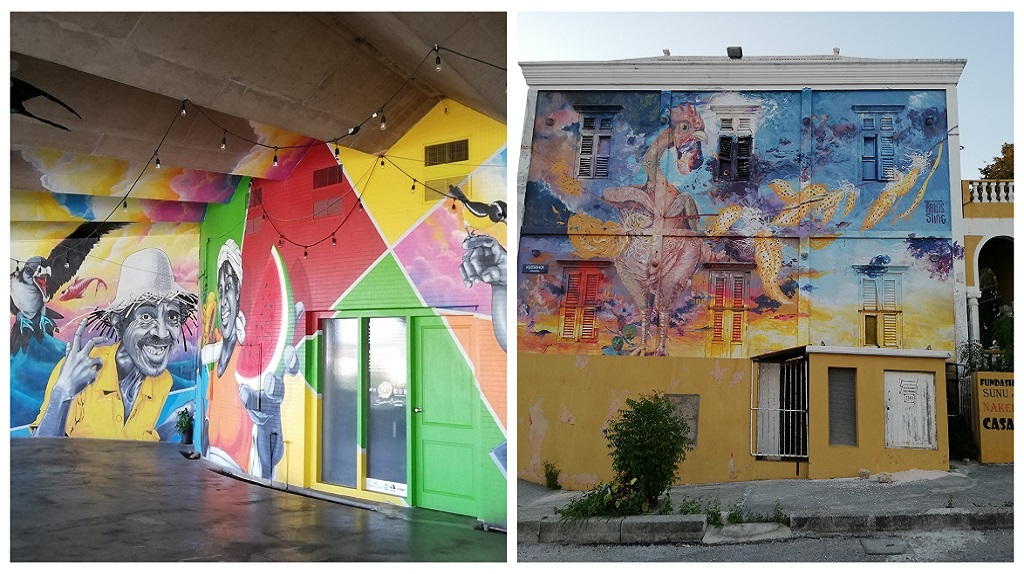 Sandals Royal Curaçao recently collaborated on projects with fine artist Francis Sling and art director, graphic designer, and illustrator Sander van Beusekom. Both are local artists who have created beautiful artwork that can be found on or in buildings throughout Curaçao’s capital, Willemstad, as well as many other locations on the island.

Since the resort’s construction phase, Sandals has employed a variety of local talent to bring the island’s culture to its guests. For example, a carnival group performed at the Grand Opening ceremony, and local artists regularly perform at the resort.

Francis Sling
Sling studied graphic design at the Grafisch Lyceum in Amsterdam. In 2018, he returned to his native Curaçao from the Netherlands and went to live in the neighborhood of Scharloo. His colorful home, gallery, and workplace became an attraction for locals and tourists alike. It also served as a venue for his famous paint workshops.

The studio has since moved to another location, but the gallery remains open for visitors who want to see more of his work. Sling’s prolific output of beautiful artwork led to his receiving the Amigoe Express Award for Best Artist, a prestigious local award in Curaçao at the time, in 2017 and 2018.

In addition to his larger-than-life murals in the capitals of Curaçao (one of which is featured on the right in the feature image) and Aruba, Sling has also created seventeen paintings for the Curaçao House in The Hague. Eight of his creations in the Curaçao House depict stanzas from Curaçao’s national anthem, while two are life-size portraits of Tula and Bastiaan Carpata, leaders of the 1795 Curaçao slave revolt. He is also a talented string and percussion player, composer, and poet, in addition to his work as a visual artist (painting, sculpture, and woodcarving).

Sander van Beusekom
Van Beusekom studied at the Junior Academy for Art Direction in Amsterdam. He runs the graphic design agency BLEND Creative Imaging in Willemstad with his sister Nicole. He was one of the founders of Street Art Skalo (a project of Fundashon Rebiba Skálo Abou, a foundation that aimed to revive the Scharloo district in Willemstad), whose mission is to revamp and beautify the Scharloo neighborhood and showcase local talent.

Van Beusekom created a large mural on the upper floor of the market hall when Willemstad’s central market relocated to Sha Caprileskade in 2018 (seen on the left in the feature image). In 2019, the Curaçao Tourist Board (CTB) commissioned him to create a large mural in Miami’s uber-popular Wynwood neighborhood. This mural was created to promote Curaçao in South Florida ahead of the Art Basel 2019 art fair.

Other monumental artworks that stand under van Beusekom’s name are a large mural for the Corendon Mangrove Beach Resort and the Zakitó Welcome mural (which covers a stretch of three 100-meter walls at the Koredor in Otrobanda), completed in 2020 and 2021, respectively. The CTB also commissioned the latter. In addition, van Beusekom has created several large murals for the 2019 edition of the Kaya Kaya festival in Otrobanda, which have since become one of the neighborhood’s most enduring trademarks.

Their work for Sandals Royal Curaçao
Sling and van Beusekom collaborated on the design of the resort’s food trucks, among other things. Van Beusekom devised the Toteki Foodtruck concept. The restaurant serves local cuisine and is named after the Toteki, a small lizard found almost everywhere in Curaçao. Van Beusekom designed the truck’s artwork and was instrumental in naming it. Sling painted the so-called Garden Container Bar. The artwork depicts the landscape of Curaçao in vibrant colors and paint strokes.